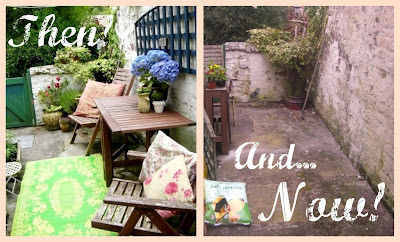 Gosh. What happened? Where did all the loveliness go? Down the swannee m’dear, with the rest of my life, down the swannee…
Though I truly once thought that it would only be when Finn was safely ensconced being force fed phonics in school that I would be able to achieve something resembling hard work unencumbered by a five year old wrapped around my personage, it seems that my heart is at it’s happiest when said child is pottering about planting sunflowers, felt-tipping my toenails and stashing secrets in his lidded desk during the school holidays.
And so last Wednesday in a fit of industriousness not oft seen in these parts, I set Finley up with a set of Easter cards to paint and went outside to strip the dilapidated garden back ready for the removal of the precocious ivy crawling up the house and the chucking of some whitewash at the crumbly old walls. I was happy with my lot. I stashed the various pots and half dead, half alive plants around the corner, brushed away a forest of fallen leaves and went inside to summon up the strength to dig the mud out of my nails and prepare myself for the packaging of son off to his Daddies and the arrival of the Rocket Scientist in time for .
I lit candles all over the place, let the scent of the blue hydrangeas blooming in terracotta pots on every surface, fragrance the house and climbed into something that said I like you, but it’s time to stop pretending I’m a full time dolly-bird and that at 5.30pm on a Springtime Wednesday evening this my Darling is how I look. Deal with it…
And in he came, dressed in his work clothes, insisting he be so hungry we had to eat forthwith and only takeaway pizza would do, and I ran about like one of the flustered little chickens I am currently minding, looking for, and failing to find a pizza menu, so we got into the kind of car you just don’t picture rocket scientists driving and collected pizza’s and trashy magazines and creme eggs and went and snuggled on the sofa, and ate garlicky doughy food in tandem, and giggled at the state of Britney Spears and then he went and stashed the pizza menu somewhere we could find it next time, went upstairs and took a shower (while I tried to come to terms with the very idea of someone using my house like his own), faffed about with the noisy boiler and walked about muttering about remembering to bring a radiator key next time he called, then let himself out of the back door to deliver pizza boxes to recycling bin and came back looking shaken at the state of my garden, texted someone in a mysterious fashion, backwards and forwards for an hour (reporting me to the backyard police methinks) and then promptly fell asleep, holding my hand.
And all was well that ended dully. And I decided that I could really rather get used to this man about the house lark even if here was a plodding lukewarm little man who never wanted to leave the safety of my sofa for anything more thrilling than a pizza, let alone a meal out, cinema spree or even a tinsy little walk around the dusky light of the neighbourhood, and in my own head set aside the bristly don’t tread too deeply into my territory little soul that I am, at exactly the same time as he was deciding that the shock of my destroyed garden and bangy old boiler was just too much too bear and thus he would not be returning my calls ever ever again and would instead ruin my Easter weekend with the kind of sudden all consuming silence that would have had me spitting feathers had I cared about anything other than the fact that I cannot abide bad manners in forty two year old men who should know better.
Damn him to hell and back. But never mind because there was rose and black pepper chocolate for breakfast and an Easter egg hunt to distract me instead, there was a gorgeous cream leather handbag from my sister and fish in a restaurant with all the family, there was lavender syrup trickled over big fat strawberries, lots and lots of sun, a night spent holding my sobbing little boy after an ankle accident, an Elizabeth Taylor novel procured in a secondhand shop and thrown off in favour of the new Marion Keyes 800 pager, prawns and hake and trout to wash out my insides after too much stolen Dairy milk and of course the pleasure of still holding the world record for being dumped more times than it is possible for one woman to tolerate without volunteering herself for the convent.
And the moral of this woebegon tale? Be a dolly bird all your life or else! And in the meantime hound your darling, lovely blog readers until they come up with something that will transform that ugly little patch of concrete into something resembling a pretty little garden in which to tear out your hair….
Help! Ideas, s’il vous plait?