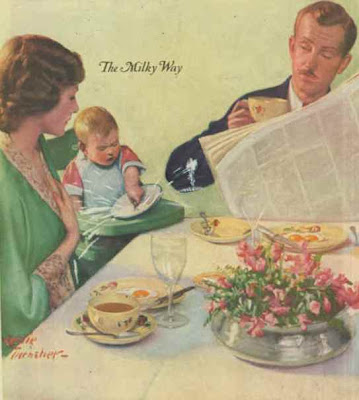 Which is more important? Which should be your priority? Do children matter above all else, or does solidifying your relationship by working at perfect spousedom mean that children will be guaranteed security and contentment regardless? Should your partner come always first?

I have been muddling this question around in my mind ever since I was seduced by a pretty blue cover, into buying The Proper Care and Feeding of Husbands shortly after Finley was born and shortly before Quazi-Husband went walkies with a Wiganer, never to be seen playing the part of practiced upon perfect spouse thereafter.

Did he go because after fifteen years together my priorites had changed dramatically following the birth of a child who in the second year of his life nearly died of mal-nutrition owing to a harrowing case of undiagnosed Coeliacs Disease? Should I have been performing sexual gymnastics inbetween changing the twenty four stinky nappies a day Finley was then producing? Was my failure to support his change in career at that time not simply down to the fact that as a Mother I was absolutely bloody terrified and that in the aftermath of the babies not very life threatening after all diagnosis, I simply glad he was still alive and thus temporarily lost in a talcum powder cloud of God forsaken gratitude??

Hells bells. Aren’t we glad I got that little lot off my chest?

This isn’t bitterness talking. Mark and I are now good friends to the degree that we have been more than able to look at what happened from every which way and downright ugly angle without coming to any conclusions at all, apart from that had he not left it would not have been too long before one of us was buried under the patio. He knows and regrets the devastation he caused but we remain head over heels in love with what we created regardless and so we move forward in a relationship based on utter respect for each others parenting skills without the complication or competition posed by romantic entanglement: but still I wonder…

I wonder what kind of Mother I would be if I also had to be a wife. What the synergy of those two roles would create in me. Whether once we had adjusted to Finn’s Coeliacs as of course we all did, I would have been capable of being the kind of woman able to differentiate between being a Mother and being a wife, or whether, as I suspect, life would have been the gently blissful mash of family life I always imagined it to be, with my favorite partner in crime along for the ride?

In December, however, Vogue writer Alice Thomspon put paid to the myth that putting Motherhood before wifely duty is either acceptable or even particularly desirable. Comparing the Fifties wife and Mother:

“Then women were perfectly groomed, managed a limited household budget welcomed their husbands home in the evening and settled him into his armchair, while her two well-disciplined children curled up at his feet…”

with her modern day equivalent:

“By the time we’ve finished work, put the children to bed and crawled under the kitchen table for the Lego, we’ve barely got the energy to text our husbands to buy some milk before we flop in front of the television…”

..she comes to the conlusion that it is because “those brought up on feminism are embarrased to admit we may want to nurture our husbands the way we nurture our children” that we throw all our energy into lining the family coffers and being maternal Goddesses instead and that ultimately it is because we now expect too much of our husbands, and consider ourselves rather too precious indeed, that marriages are suffering and divorce is now rife:

“He must be the perfect Father, he must cook, shop, and probably clean up afterwards, too. He must be the breadwinner (most wives, even if they work, do not really entertain the idea of a househusband), provide sex on tap (even if we won’t), remember anniversaries, birthdays, Valentine’s Day, do the school run, buy on a regular basis, deal with the car, pay the bills, do the gardening and provide us with a stream of compliments.”

Ah diddums. But yes I agree that more is now expected of husbands and indeed men in general: but it is only because societies expectations of both women and what constitutes a healthy marriage has changed. A society in which, as an article in the Sunday Times a few weeks ago put it, the bar has been raised and a good wife must now “have a job of her own (or at least some serious charity commitments), be able to raise a family and keep house, plus be arm candy when required, smart enough to step in and give a strategic fillip to her husband’s career, publicly attentive and privately supportive-and that’s just at the entry level.”

Heckity pie. What happened to mutual support? Teamwork for the common good of the beloved family? And ye gads hold on a minute- arm candy?? Even the language used in the discourse of modern day marriage is somewhat abhorrent, let alone the flurry of raised expectation, especially when it is all too easy both, morally and legally for said husbands to bale, or perhaps even worse, stay and wear a badge of indifference towards the woman who senses her failure and his consequent distaste on a daily basis and is often no more capable of re-inventing herself as arm candy than he is of running for President.

Well whatever.That’s what I say. This my Darlings, is just one more reason to feel guilty, in a media-driven world that consistently fails to acknowledge the contribution good mothering makes to society and undermines it at every turn, and that more than that still objects to women being first and foremost themselves undefined by whatever role they may or may not be playing.

Moreover the modern women doesn’t have to feel at odds with feminism when she nurtures her husband: she does it because grown up human beings needs nurturing as much as children do; because in decent marriage she is just as likely to experience what it is to be nurtured; and because nurture itself is implicit to all the ties that bind us.

Women who expect less do themselves an injustice. Adoration of our children, even at the risk of everything else in our lives, is never squandered and we have every right to expect a partner equal in emotional intelligence to ourselves.

Scenes From A Half Term Monday