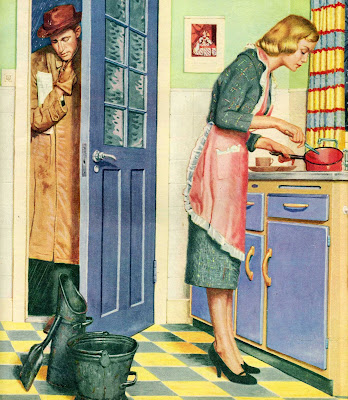 “This breadwinner will have to turn coal heaver before he gets his dinner tonight, so the sooner he starts gatheing winter fuel the better Artist Chittock has a theory about warm welcomes like this- it is not the best moment to remind a man of his responsibilities. But someone has to keep the home fires burning, and at six minutes to serving time cooks have other irons in the fire. The effort will seem worthwhile when he’s basking in the glow- of a cosy wife’s grateful smile.” 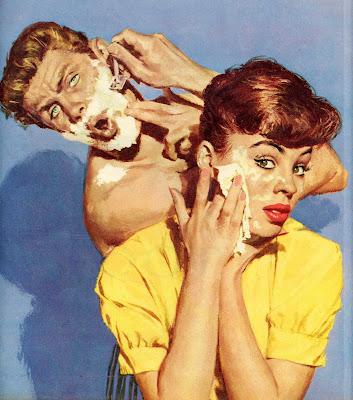 “Mirror, mirror on the wall. Who is the fairest one of all? No doubt the husband with the Santa Claus chin would claim that he was- especially when his career girl wife takes advantage of masculine chivalry to try that new make-up technique straight out of the morning newspaper. And they both have to be at work by nine… But cover artist Larent has left him with at least one reflection- that he first promised to install a second mirror in the bathroom months ago…” 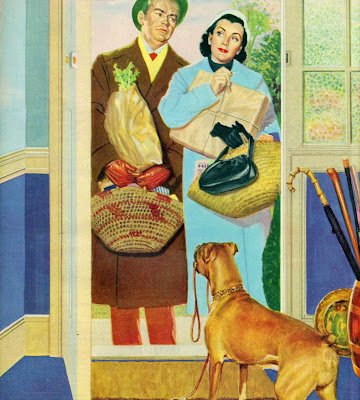 “Oh no! Just when he’s helped bring home the hard won shopping. It’s always at times like this that the dog in your life reminds you that he’s not called Rover for nothing. “And” says artist “Critchlow, “it’s no use trying the old excuse about having to see a man about a d…”. The best thing this husband can do is take the lead- by telling his wife to get the lunch and produce the from that basket. Rover might settle for twice around the garden…”

Never let it be said that I am not the most dramatic person you know. If I can turn a calamity into a catastrophe I will do it with glee. It is quite frankly, an abhorrent trait. Serve it up with nails bitten to the quick and you’ve got a sure fire route to social…

So seen as January came and went in a rather chilly flash, I rather thought it was time to share my plans with you for the rest of the year. Trash It and Treasure comes to an end for all my darling scrumptious subscribers next week, and will in the next few days be available…

This is my Seasonal Scrub Apron, fragranced with linden water and ready to go… I’ve got mine. Have you got yours? Other Things To Do At BrocanteHome Join the BrocanteHome Community Discover my daily domestic to-do lists, join the conversation, read-along with the BrocanteHome bookclub and find exclusive Community only benefits inside. Join Today (It's…

While I received a really rather excessive list of gifts this year, this is my absolutely, most scumptious favorite. Thank you Mum. Other Things To Do At BrocanteHome Join the BrocanteHome Community Discover my daily domestic to-do lists, join the conversation, read-along with the BrocanteHome bookclub and find exclusive Community only benefits inside. Join Today…

Here’s what I think: While I have never been one for spiritual mumbo-jumbo, I truly believe that when we need something and we are brave enough to ask for it, the world will contrive, one way or another to make it happen: so by committing dreams to paper, we somehow make them real. Therefore in…

I do believe that telling a story is quite the most wonderful way to sell your little somethings on Etsy  and in my humble opinion, nobody does it better than Emma at Lavender House Vintage. Her pictures speak of the kind of old fashioned humble domesticity I so adore and just browsing around her little…