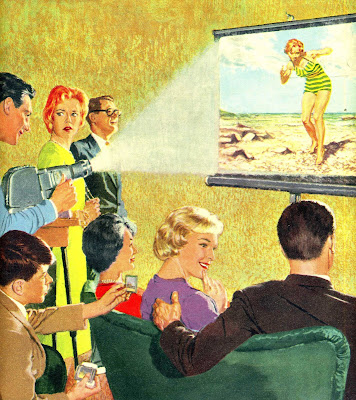 Every time I look at the horrified expression on this red haired ladies face I laugh out loud. The poor darling looks mortified and no wonder for isn’t it just like a man to not to think of editing out a photograph so clearly not fit for human consumption??

This is an image taken from the front cover of John Bull magazine, (March 7th, 1959) and is just one of the 48 charming representations of British life in the fifties I procured in what can only be described as a scrap in the Animal Rescue Shop last week.

Now treasure hunting in this particular shop is always an experience, if not because of the quite foul smell, then because it is staffed by quite the oddest assortment of animal lovers you have ever met: on this occasion a lovely Chinese man with a green cardigan and charming buck toothed smile, accompanied by a gentle fuzzy haired giant of a man who both rocked back and forth constantly and talked ten to the dozen. Neither could do enough for their motley crew of customers (me) and I swear better customer service could not be found in the whole of Lancashire. But I digress…

So there I was, skimming the shelves as fast as possible, (because the shop smells so very badly my Mum won’t come in and was hovering chilled to the bone in the doorway), and exclaiming in glee when I happened across a frankly over-priced ode to Beauty, circa 1956, complete with the delights of the banana diet and the frankly ubiquitous recommendation of laxatives for a healthier happier digestive system.

Feeling all was well with the universe, I hurried to the counter, handed the to the rocking man and noticed out of the corner of my eye another man shifting through a tower of vintage magazines. I looked at him and he looked at me.

“OOOoooh” he said, “someone else who knows a bargain when she see’s one. John Bull’s love. I only want the ebay saleable ones, you can have the rest…“

Having established that this lovely collection of John Bull magazines were to be sold individually for 40p each or for a sum to be agreed for the lot, I offered £10.00 and after much debate amongst themselves, and the possibility of a phone-call to the powers that be discussed, the Chinese man looked in a worried fashion at his calculator and said £12.00 and I didn’t feel like arguing because he was so very, very nice, and said yes and that is when the trouble began.

The Ebay seller had chosen three copies, and the other 68 were for me. The attending staff were troubling themselves for a carrier , when up shuffled a man in an anorak, hood pulled up and dark jazzy sunglasses quite unnecessary on such a dull day, apparently glued to his face. He listened to me waxing enthusiastically about my exciting hoard and all of a sudden made a grab for a handful of magazines.

Put them down Chris, said the man behind the counter, who was obviously used to Chris making unforeseen literary heists on giddy customers.

No, said Chris, I’m having them.

This lady has already bought them. Put them down Chris!

No, said Chris, shoving them inside his anorak.

Now at this moment I was prepared to hand over my twelve pound regardless and make a hasty exit, when to my utter horror, naughty Chris made a second lunge at my stash and picked up another handful, this time grabbing one of the best covers amongst them, (A rather horrified young lady in glorious fifties underwear, hiding behind the curtain, while a whistling window cleaner got to work).

The poor befuddled staff looked mortified and helpless and kind of hopeless, so it was clearly up to me to take charge of the matter, but grappling with Chris who was clearly madder than a box of frogs wasn’t an option, and screaming blue murder might have had the delicate staff in tears, so offering ten pound for my depleted pile of magazines and beating a sharp retreat was my only option. So that is what I did, I paid for the fifty magazines remaining, told them I would be back later to pick them up and left them to deal with Chris, who was now sneaking the pointy bra-ed lady on the cover of the issue I would have sold my granny for, in and out of his anorak and sneaking furtive glances at it as if he was in Soho.

And all’s well that ends bonkers. Except that wasn’t the end of it. When I went back the highly excited man behind the counter told me he had been able to sort Chris out and had managed to get all the magazines back and I congratulated him with all the delirious glee such a difficult feat deserved and lugged my load home where upon a quick count of the mags in the revealed that they now numbered just 48…

It is a mystery worthy of Enid Blyton, but not one I care to dwell on, so delighted am I with those that did indeed make it home to chez Brocante… images which I’m sure you will thank me for once I get the tired old wheels of my scanner into motion…

Enid Blyton Saves the Day! When the big bad world of being a grown up gets too much for me, I retreat under my duvet, with a glass of milk and a biscuit or seven and read Malory Towers or The St Clares series from Enid Blyton, and pretend I am eleven years old, in…

Finley doesn’t have dyspraxia. He doesn’t have anything anyone cares to give a name to because what he is suffering from is sheer joie de vivre…. He is, as I quietly suspected, (but didn’t want to shout about for fear of sounding like I was boasting), an unusually creative, linguistically gifted and emotional child whose…

Oh what it is to be organized Housekeepers, because when you have a scrumptious copy of my Vintage Housekeepers Planner you have all the tools you need to know exactly what “organized” feels like! With sixty downloadable pages, charts, logs and forms there is absolutely everything you need to start to plan a life more…

.. the rain is drumming on our rather luxurious tin roof like so many diddy men banging drums. But we are in the beautiful city of York and there is so much to see and do, so much to entertain kids and grown-up ladies alike (and plenty of bars for thirsty men) so all is really…

They have this week. My insides are rotting as we speak. Other Things To Do At BrocanteHome Join the BrocanteHome Community Discover my daily domestic to-do lists, join the conversation, read-along with the BrocanteHome bookclub and find exclusive Community only benefits inside. Join Today (It's FREE!) Life Love & Vintage Housekeeping the by BrocantePrintables on…

It is a fact of life that children have bad taste. But it surely doesn’t have to be that way? What if we had an outrageous Mommy tantrum and said a big bad no to the Power Ranger duvets? Refused to allow the  Teletubbie  posters to grace our walls? Banished Barbie from the bedroom? I…