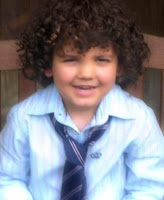 Gorgeous though he undoubtedly is, Finley isn’t an easy child to bring up. Like all boy’s of his age he is constantly on the move, but he combines this permanent motion with relentless conversation, 1001 searching questions, and a running commentary of his every move, which is quite frankly exhausting.
Though he is cute enough to get away with it, his hair is wild, his clothes are always undone, and his fingernails are dirty, and this alongside the fact that he can render a room immaculate to bombsite in the apparent blink of an eye, merely by hurtling around it and leaving destruction in his wake means that life as his Mummy always feels a little out of control… though my grubby little munchkin is rarely naughty, always polite and possesses emotional intelligence extremely rare in children of his age, so whether or not I feel demented is totally eclipsed by pride for a little boy who can with a simple sentence or two bring tears to the eyes of everybody in the room, so heartwarming is his sheer joy in everything he encounters and his skill in putting that joy into words.

Though all Mum’s like to think their children are special, I have always known that there was something different about Finley: that he wasn’t like other children, and his first experience of formal education immediately resulted in assessment.
Finley, I was told, wasn’t right. He fell over too much. He was lacking in the scissor skills department. His gross and fine motor skills didn’t marry with his very obvious verbal intelligence, he chewed his nails and worried too much and all of this implied that there was something wrong. That in their words, he would never fit into the standard educational system because his glaring innate creativity and emotional intelligence marred by his inability to stand up without falling over or running across the room and chucking himself at the wall just for the fun of it, would mean that he would struggle to fit into the typical classroom scenario. For a while Dyspraxia was talked about in hushed tones (as if it was a life sentence) but was ultimately dismissed by occupational therapists who declared him fine and dandy, said look, he can thread beads and draw perfect triangles: he can kick and catch a ball, walk along a straight line and though he is a tad wobbly, crawl around with his left arm sticking out at right angles to his body as requested: so let that be an end to it. He is a joy. Send him to big school and see how he fares.

And so that is what I did. I sent him, and he took to it like a fish takes to water, loving the interaction with other children, adoring his teachers and enjoying the challenge of learning to read. And then the jungle drums started beating all over again. His letter formation was dodgy. He worried out loud about too many little things children his age didn’t need to worry about. He pre-empted danger where there was none to be found. He threw his coat at his hook and dashed off to play without seeing it fall to the ground. Once he even managed to fasten up his shirt inside out… Finley, by all accounts, wasn’t right. Could it be Dyspraxia, they whispered?

Well? Could it? You tell me, I whispered back. Perhaps he was just five and very busy? Perhaps he’s just bright and pre-empts danger because he is clever enough to work out that it does in fact exist, that this is a child with Coeliacs disease, a child used to identifying personal danger. Or perhaps, yes, perhaps, there is something wrong.

And the rest of me understood that this is a child who one way or another has to fight his way through an educational system that will keep on drawing attention to his differences. That this is indeed a child who will not let me sit down without crawling on top of me and squashing his body against mine, who cannot bear hair cuts or hair washing, cannot tolerate the sound of the kettle boiling or the vacuum cleaner working, worries about the risk of the toilet flooding and is so afraid of dogs and goats he will run into oncoming traffic rather than come face to face with one. (Though thankfully loose goats are few and far between in these parts). That this is a child who is different and that it is my duty as his Mummy to give this difference the respect it deserves so we can all muddle our way through the school years.

And so I began reading. I read The Spirited Child and The Sensitive Child. I read up on the symptoms of Dyspraxia and associated disorders, googled case studies, read The Sensory-Sensitive Child and finally found something that rang true with me. Sensory Processing Disorder described, almost exactly, my perception of Finley’s difficulties. SPD with a particular leaning to Proprioceptive Dysfunction explained Finley’s quirks and made sense of my experience of mothering a child like him: both the heart-ache and the exhaustion. And more than that, SPD was occasionally linked with children with Coeliacs, due to the fact that more than 40% suffered damage to their central nervous systems before diagnosis.

I was ready to go in all guns blazing. I was ready to go in and fight the same kind of battle I’d had to have Finley’s Coeliacs diagnosed in the first place: twelve months of knowing in my heart what was wrong with my child, but watching him slowly starve to death while the medical system investigated everything from weak stomach muscles to cystic fibrosis and stomach cancer, all the time ignoring my pleas to test him for what seemed all to obvious to me.

So I was ready to do battle. And then a nice little woman called Pauline arrived, case notes in hand, admired my chipped paint and sat on my sofa and said that they in the Occcupational Therapy department at the Children’s Centre had come to the conclusion that Finley had Sensory Processing Disorder, with clear Proprioceptive failings that could indeed be compromising his ability to manage a classroom situation. I could have kissed her.

It isn’t of course an answer. It is in fact merely a label. Sensory Processing Disorder covers a huge spectrum of difficulties that vary by both degree and impact. Nothing alters the fact that Finn is managing well, that he can now almost read and write and that label or no label, the kid can’t stop talking. Life with him isn’t easy. He is more demanding than the next child, but to me it is the fact that he asks me questions I cannot answer that is the exhausting bit and everything else is just a scrumptious little bit of the eccentric little boy he is. Eccentricity that is very real because Finley isn’t experiencing the world in the same way that you and I do.

And long may it last because chatterbox he may be, but I wouldn’t change one little sausage of him. Not a single gluten-free sausage.

The jigsaw situation is getting as out of hand as is the "It wasn’t me who wrote on the wall Mummy. I’m just not interested in writing on the wall, I  promise" situation. If  I’m not  tripping over one of seven jigsaws…

How the heck are you all? Goodness knows where I’ve been all week, it’s not as though I haven’t got an abundance of free mornings and nights in front of the TV on my hands now is it…? It’s just been one…

Here begins a new series on BrocanteHome: the occasional, unedited spilling of my morning mind on to the screen. Approximately seven hundred and fifty words  of stream of consciousness, transparent writing inspired by Julia Cameron. So you can dig a little deeper…

Serendipity, aren’t you just the loveliest little thing? New books from two of my favorite authors, Alexandra Stoddard and Victoria Moran reminding me that seeking magic in even the dullest of days is what we are designed for, and that Mommyhood is…

One of the things I was dreading about  Autumn drawing in was suddenly finding myself trapped behind  drawn curtains night after night… I’ve always loved Winter evenings: snuggly socks and hot chocolate, blankets tossed over the back of my armchair and stacks…