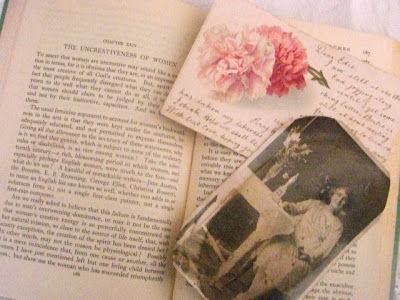 That horrible title comes courtesy of a chapter in a I picked up on one of my treasure hunting missions. A hilarious little tome by one Richard Curle, entitled Women: An Analytical Study. Written in 1947, it’s tone is set on the title page with a quote from Cary that goes:

“Women have three sets of eyes. In their fingers for curtains and stuff. In the backs of their heads for their back hair. And all over them for any other woman.”

and the contents page reveals that what follows will be similarly misogynistic in tone, with chapters entitled, “Unfairness As An Art” and “Feminine Inconsistency” alongside thirty others dedicated to analyzing every aspect of the feminine psyche from women’s experience of marriage, to the “problem of modesty”, “the background of moods”, and at the end, a rather spectacularly bonkers comparison of British and American women that poses them against each other as if they were each from a different species. (Are we? Discuss!)….

“The English woman, living in a smallish island, where conditions are more or less the same throughout and where extremes of heat and cold are not usually very marked, has with her centuries of background to aid her, a certain balance which the American women does not have. And maybe a certain serenity deriving from the restful beauty of the land, which is so different from anything in America. But whatever the reason, the Americans are more more highly strung than the English and their women, in consequence, more energetic, even if more erratic, than their English sisters.”

Though clearly in this, the twenty first century, political correctess demands we be appalled by some of the rather fiestier and indeed blatantly sexist opinions of Mr Curle, it is a written with such humour and careful observations, that my Mum and I, on the journey home following it’s discovery, could not help roaring laughing at (“It has been said that it is a comfortable feeling for a woman to have a man about the house, but if it were not also an infernal nuisance I suspect there would be fewer men about houses than there are”- The implication being that we women thoroughly enjoy moaning about men!) and gave us cause for much serious debate in the face of some of Richard Curles more acute observations. Though of course it was his thoughts on home and womens relationship to it as a wife and mother, that remain of most interest me…

On social climbing, he had this to say:

“Women may consult their husbands on the general lines of their joint activities, but it is upon the wives alone that the details devolve. And despite the troubles and the heartaches, women would not have it otherwise. They have an abhorrence of the slovenly in their social arrangements, and they deplore men’s habit of sudden forgetfulness of what is seemly. The casual visitor, however welcome to a husband, is practically never welcome to a wife, who highly resents the mere contingency of being caught off her guard. An Englishwoman’s home is her castle in a more fiercely individual meaning than is an Englishman’s home his castle. It comes to this, that as society is a womens particular care, she considers herself entitled to lay down the rules which control it. She is acting not only for herself, but for her family and indeed, for women in general. If she does happen to have personal ambitions they are but the small self-conscious ripple on a vast self-conscious tide. At least that is the theory and the ideal.”

And on sexual equality in the homes he said this:

“It is no use pretending that a girl is as free an agent as a man. She simply is not. Her Mother, certainly her Grandmother, could give her some useful tips. If men do not want to impinge on women’s spheres, why do women want to impinge on men’s? I am not so silly as to think that women should be relegated to the nursery or the kitchen or any such nonsense such as that, but I am not at all sure that the successful running ofa house is any easier than the successful running of an office. But many women despise housekeeping, though they would be mortified were their husbands to announce that they were sick of work and intended in the future to do nothing but gad about and enjoy themselves.”

Culminating finally in a chapter on “What women Really Want” in which, I think you will agree, though he speaks a lot of truth, Mr Richard Curle goes one step too far:

” Nearly all women- especially, as I pointed out in another chapter, women with children- covet security. Men, with their volatile romanticism and their eye for a pretty face, are constantly undermining a women’s feeling of safety, and perhaps it is in her longing for security that is born the double desire for peace and power. A woman’s ceaseless efforts to fortify her position and to provide for the future, are in essence, a sign of her sceptism about men. And so, perchance, is her sleppless curiousity about them, a cuiosity which is both zestful and fearful. she believes she can never be at rest until, though a re-organisation of society, she has put a definite curb upon men’s natural proclivities.

But sometimes women get so worried and muddled that they scarely know what they want, although they do know- let me repeat it- that it is something totally different from anything they have. There are occasions when, perhaps for no specific reason, all turns to bitterness in a woman’s mind- her husband her children, her friends, her home. She feels that somewhere, somehow, there must be a solution to her problems, but, apart from a sense of profound dissatisfaction, she could hardly name what her problems are. Such a state resembles those nightmares in which the earth is full of so appalling, aching a boredom that death would almost be preferable.”

“The nicest and sweetest days are not those on which anything very splendid or wonderful or exciting happens, but those that bring simple little pleasures, following one after another softly, like pearls slipping off a string.” -Lucy Maud Montgomery Because nothing upon nothing or nothing sums up my day today better than this gorgeous quote….

Never, ever, never rest on your laurels. Never say I am taking time off to drink home-made lemonade and fall in love with Monty Don. Don’t spend too much time floating in a bath of rosemary salt or slip into bed before it is even dark four nights on the run. Don’t plant opal basil,…

In my dreams Father Christmas has enlisted the help of a small army of elves to help him stuff  a duck egg blue Aga into my over-sized seamed stocking, while in reality the chances of my ever owning one of these much coveted wonder ovens is right up there with Robbie Williams applying for divorce…

I did quite the strangest thing the other day. I was wondering around the house, chatting to my Dad on the phone and trying not to kill myself on the elaborately designed Power Ranger boobie traps Finley constructs, when out of the corner of my eye I spotted a spider as big as my hand…

Oh dear. I’ve known about Polyvore since the day it opened it’s doors and knowing myself as I do, thought it best avoided, if I was to get anything done at all. And then today I was all curled up on the sofa with my laptop on my knee, Christmas In Connecticut on the DVD…