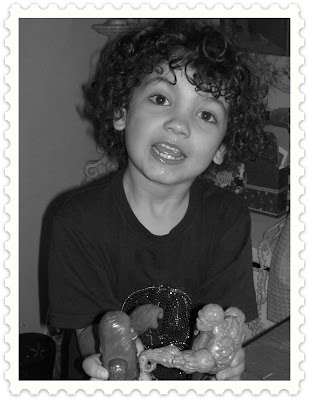 While I may be all sweetness and light online, in reality I can be a bit of a cow. While my Dad tried to impress upon me the importance of reading How To Win Friends and Influence People I was too busy obsessing over the naughty bits in the rite of passage that is Judy Blume’s Forever to be concerned about my all too obvious lack of social skills. And so it came to pass that I grew up firm in the belief that I AM RIGHT and YOU ARE WRONG and no more is this evident than should you find yourself in discussion with me about anything remotely babba related, because when it come’s to parenting I (shamefully) KNOW I am right. Even when I’m clearly completely WRONG!

Now as you can imagine this is the kind of attitude that can get you into all kind of fixes when your entire social life is based around the school gates and every conversation you ever have with the suburban mommies in your Mommy possie naturally revolves around your respective children. While other women nod politely as they listen to each others experiences, I am there shouting my mouth off about my latest theories in not very progressive childcare, shaking my head vehmenently at anyone ludicrous enough to be following anything other than the Alison May School of Mothering and feeling sad in my heart for the little blighters unlucky enough to have the kind of Mummy who isn’t me!

I know. Don’t worry, there are times when I want to strangle me too.

And then my own little blighter started shooting all my parenting skills sky high and I have to eat humble pie in the cupboard under the stairs and pretend I reserve the right to change my mind in public, should I then find myself having to explain why I am now embracing something I previously loudly deplored.

Take for instance the question of extra-curricular activities. These, my darling oh so tolerant friends, know I could once barely stomach. No! Not for my child the dragging off to football three times a week and karate on a Friday and Recorder lessons at lunchtimes and drama class followed by swimming and a quick shimmy under the monkey bars at the baby-gym on a Saturday. No! Of course my son wouldn’t be having extra maths lessons, joining Scouts or Sunday school or Big boy Tumble Tots or playing the violin or learning street dance, or indeed doing just about anything that didn’t happen between the hours of nine and three, or ate into the empty, just being time I have long believed paramount to the development of the kind of wild imagination I think every child should be blessed with.

So for a while I stuck to my guns. I looked mildly disapproving at the very idea of any child having to endure another lesson of whatever when they crawl home white-faced with baby exhaustion after a long day in reception and I failed to feel sympathetic when one Mummy after another bemoaned their own lack of time due to their willingness to spend every spare minute ferrying little children from pillar to post. I was that Mother. The superior being you want to smack.

And then the rebellion began. The occupational therapist suggested that Finley might benefit from the discipline of martial arts and so off to karate he went. Then Finley himself announced that his friend Mark was brilliant at football and if I didn’t let him go to to Saturday morning footie he would DIE and because one cannot sacrifice one’s child for the sake of half an hour shivering at the side of a cold field, I said ok to that too and before I knew it I was dallying with the idea of swimming lessons and a weekly half hour with a tutor to help him with his writing and maybe even drama lessons and then he announced his intention to be a model/actor (!) when he grew up and I, flailing permanently in single mummy guilt, decided that drama lessons it was and promptly delivered him to an empty school having mixed up the starting dates for the class that was going to make my baby a star!

And so it goes on. I’m riding a coconut mat down the helter-skelter of IT’S ALL TOO MUCH and all of a sudden I find myself helpless to resist the kind of peer pressure little boys and other Mummies apply in great big dollops and I have to apologise to Kath who bears the brunt of my most outraged and usually desperately dull parenting rants because it is clearer by the day that I haven’t got the courage of my convictions and will go on delivering my child to activities I suspect neither of us much enjoy, when in my heart of hearts I know that it isn’t a man in a football kit  or a scary lady with a whistle at the side of a swimming pool who will help my little boy become the strong, imaginative, creative man I know he will be, but instead, the cosy hours spent lying next to me on the floor, telling me in great detail the reason why Willie Wonka is the scariest film ever made that will make all the difference. The time he spends apparently talking to himself, narrating games of such imaginative magnitude I cannot ever hope to understand them, that will shape his creativity, and all the other rituals that we maintain as a tiny family that will let him be the kind of little boy happiest dangling upside down off his chair, singing at the top of his voice and dancing by himself when he thinks no-one is watching, and  ultimately provide him with the ability to entertain himself without constant stimulation.

Tell me now how much is too much? At what point did I begin to lose confidence in that which I was sure of?  Is that what happens, do we begin to doubt ourselves the minute our children assert themselves? When they become not mini-me’s but little people in their own right?

I really don’t think I was cut out to be a Soccer Mom.