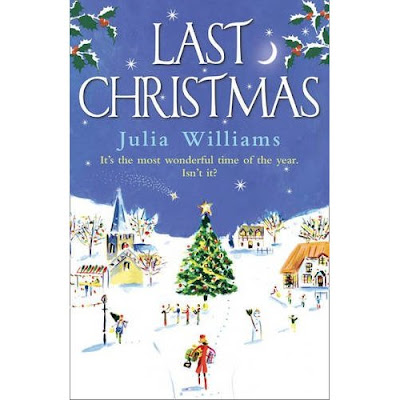 It is a rare day indeed that I find myself chucking a into a shopping basket full of sausages and pomegranates, but occasionally the fairy taps me on the shoulder in the most unlikely of places and whispers, Psssst, there! That one is for you! And I tell you, my little fluttery literary advisor is very rarely wrong…
Because though Julia Williams is blessed with the kind of cover that would usually conjure up nightmares of the sanitized country-life chick(en) lit kind, I was seduced m’dears by the double whammy that is a) adding another little to my Christmas novel pile, and b) happening across a story that features a woman who makes her living peddling domestic advice on the internet!
You see, Catherine Tinsall (gedditt??) the heroine of Last Christmas is otherwise known as The Happy Homemaker, the internet Goddess of all things Domestic and this is the tale of the Christmas her carefully stitched up life begins to come undone. Featuring a cast of  characters rather cheesily named Noel, Gabriel and Marianne all of whom are muddling their way through the festive season in a village called Hope, I can’t say I’ve got high hopes for great literary shakes but methinks there is a time and a place for the cosiest of Christmas stories and that time, my Darling Housekeepers is now when nothing, but nothing, sounds snugglier than climbing into bed early with a cup of piping hot spiced chai, a Lindt reindeer and a hop and a skip into a festive tale guaranteed to have a fairy lit happy ending.
Night Night Sweethearts.x