Scenes From A Work In Progress 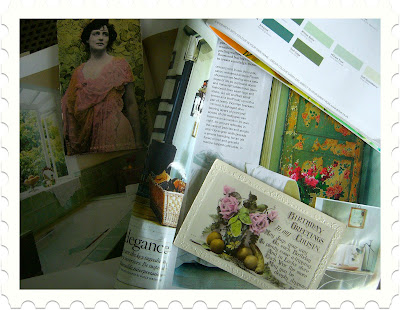 Remember this? The day I stripped up the bathroom carpet that caused much consternation amongst the good vintage Housekeepers of the interweb? “Don’t be so lazy and so pampering” was the appalled comment of one fine lady, and for at least a few moments I was rather tempted to appoint her my life-coach and see if she could apply her stern disgust to all the other areas of my life where laziness and pampering stand between me and  the opportunity to be some kind of wonderful! 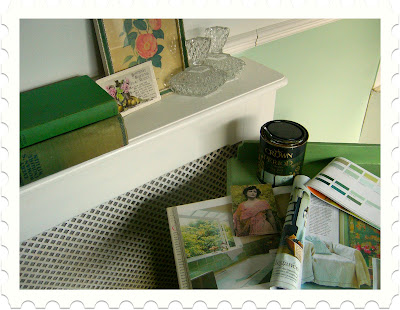 Swoosh forward almost two years and here I am, finally getting round to decorating said bathroom. Or rather, Richard (aka Superman) finished painting the house cream, climbed down off his ladder and arrived bearing paint charts and the strong-willed intention to apply a little of his own brand magic to the bathroom I was always moaning about.
And that m’dears is where I threw him into a muddle with my upside-down, bottom over breast approach to life, love and indeed vintage decorating! Bless him, he could barely fathom my thought processes. Could only stare in bewilderment while I waffled on about the jade green bathroom in one of the Shabby Chic books and set about creating an inspirational 3d mood-board right there on the bathroom floor, while he talked mysteriously about sealants and grouting and mixed, before my eyes, just the right colour to go under the dado rail he had fitted… 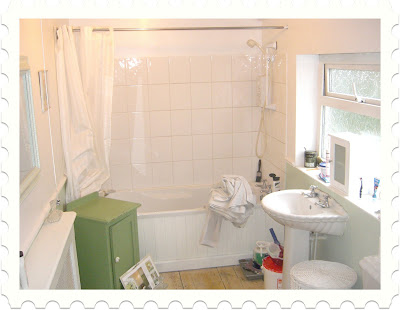 And two weeks later here we are: tiles to be grouted, a floor to be painted (White? Full paint? A limed-style wash?), dado to be filled and painted, pictures and mirrors that Alison put up before she should taken down again, sink to be sealed, shower rail and shower to be changed, the most gorgeous shower curtain in the world to be hung (a TK Maxx confection of scrumptiously thick white cotton and liner), towel rails attached, diddy bathroom cabinet hung, glass knobs attached here, there and everywhere, puttery treats  to be applied by the dozen and a couple of arguments to be resolved… 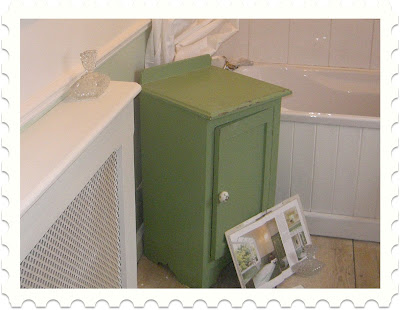 You see Richard hasn’t got a vintage bone in his body. And while he doesn’t actually live here, he is a man ABUNDANT with opinion. And he is also of the 24/7 notion that he is RIGHT and I, in all my decorating innocence will eventually come around to his way of thinking or else he will paint an eggshell white stripe down my nose. And so we have reached something of a stalemate on three differences of opinion.
Namely that:
A) I rather like the little old cupboard exactly as it is and even feel inclined to rough it up a little bit more, while Richard insists the cupboard should be painted exactly the same colour as the wall and a crystal knob applied to replace the happy dotty one I attached.
B) I believe that the tongue and groove on the side of the bath should be painted white, (thus increasing the size of the bathroom), while he believes that it should be painted the same colour as the lower half of the walls: ie: a pale green or else we will drown in white paint.
and finally C) I am more than happy with the little old frames my rosey floral pictures, bought for no more than 20p each were found in, while Richard is over-eager to strip them down and re-frame them in something that “matches” the bathroom.
The whole business is a worry on my mind, so please (I beg you) feel free to wager in on the first major disagreements of our fledgling relationship. We could do with a whole gang of informed (and oh so shabby!) referees between us…