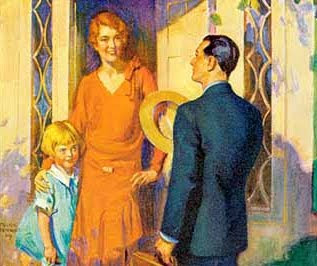 And so since the day you bought it almost ten years ago the little house you live in has been white.Though much talked about, it has never been painted and now the white has a grey cast you had almost become resigned to. Almost. Never rankling you quite as much as the persistent crop of tangled weeds strangling the postage stamp that is your front garden (while simultaneously lowering the tone of a lane that considers itself a tad too well to do), but casting a shadow over a sunny little life all the same.
Some things you see, seem impossible. And then he is there, all six foot four of him, and the pebbles too heavy to load into the car you haven’t got, are stifling the life, prettily, out of the weeds in the garden and you are walking around the diy store, hand in hand, freaking yourself out while debating the merits of painting the house one of seven possible shades of masonary cream, and looking at him in something akin to heavenly wonder when he kisses your nose and tells you painting the house will only take a couple of hours, certain now that there is nothing he cannot do: bake cheesecake, transform gardens, paint houses, perform brain surgery and force you, biting your lip in utter terror, out of your comfort zone.
At night time, when he isn’t there laughing at the peculiar combinations you see fit to serve up as dinner, you do not miss him. You are accustomed to your own company, greedy for the kind of independance that wouldn’t dream of lifting up a paintbrush and is letting the house fall to rack and ruin: living proof that one can live in beautiful, contented shambles and only occasionally ache for the stroke of a paint splattered hand across your chin. Living proof that fear is a stubborn old mule.
Because you are a little afraid. It has been three long years of yourself, and the picking up and putting down of what went before. Of resignation and a collection of men nit-picking at your ability to trust in your own dubious judgement. After trauma, emotional or otherwise, one battens down the hatches and makes for those who are left behind, a safe haven. Your safe haven has candles and books and blankets and a little boy so precious you are only willing to share him bit by bit. A goodnight before he goes to bed here, a trip to the cinema to watch some spectacular 3D affair there, the three of you sitting grinning at each other in Micheal Cain style black rimmed glasses while eating Percy Pigtails and Colin Caterpillars and other sweeties he cares enough to go buy in his lunch hour. Then maybe half an hour in McDonalds once in a while and occasionally a few minutes out of the room while they become accustomed to each other and negotiate a friendship based on the strengths and weaknesses of various Pokemon that you will never be a part of. Leaning against the door listening. Crossing your fingers that neither will find the other an impediment to loving you. Crossing your fingers in the hope that the tall one knows what an absolute gift the little one is and treads carefully upon his dreams forever after.
At night time, when he is there you drink red wine and pinch each others weak spots. Sometimes you poke a finger into old scars just to see how deep the wound goes, force feed him olives and pine nuts and all the other things he hates just because you can and stretch the elastic of his boundaries so far back you are certain that all too soon they will snap and ping you in the face. It is early days. Both of you negotiating the weird, terrifying terrain between dating and hours spent on the sofa watching Come Dine with Me without the fluttery screen of false eyelashes between you.
And now the house is going to be cream. He will transform it before your eyes and your hard won independence will shrink a little in shame. Butter cream. A soft yellow, yielding cream, that will change your emotional landscape and have you falling in love with your little terraced cottage all over again. Falling in love. Yes. You are a little bit, a lot, in mad whimsical scary love and the thought that someone loves you back is enough to have you seeking shelter in the cupboard under the stairs. While the thought that someone cares enough to sprinkle pebbles over the ugliest of your weeds is enough to make you feel like singing it from the rooftops.
If only you could sing. Or dance. Or order an Indian meal from a restaurant that actually delivers. But alas you can’t so thank goodness perfection isn’t part of the deal.
Possibility is enough.

Throw Your Books Away