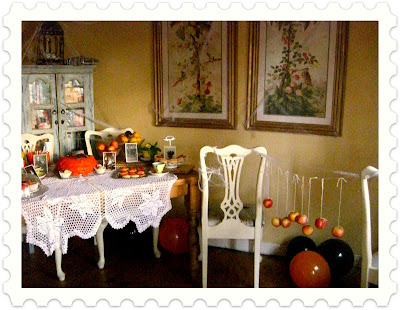 I am the worlds worst hostess. I decide in a fit of Motherly Love to throw my son a little Halloween party and have darling Richard pulling out all the stops to make it happen (including baking the cake, cutting out seven fabulous pumpkins and stringing the house with cobwebs) and when the twilight hour arrives I set my mouth in a grim line and carry on as if I was hosting a glittering event at Buckingham Palace and my head is on the line if things ain’t perfect. 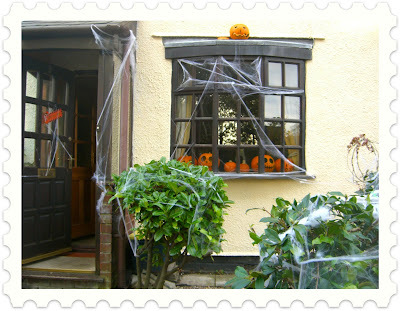 A good hostess should seem to float on air, wafting around in a fragrant haze of party apron and lipstick. She should not forget to get dressed for said party and greet guests in decorating clothes and bed hair. She shouldn’t worry if Master A won’t eat blood and guts pizza, nor try to force feed Little Miss C orange worms. And she very definitely shouldn’t panic and get a little screechy when naughty boys engage in much talk about boobies and other unsalubrious body parts and threaten to ruin the demure eating habits of quite simply scrumptious little girly pumpkins and witches and pretty little imps. 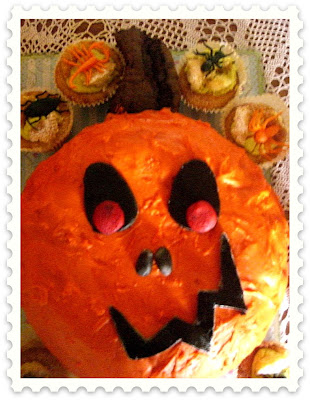 But this is what spooky real life looks like: one gorgeous boyfriend does all the work and vanishes before my eyes to be replaced at party time by ex-ogre and father of cute little devil, who will run party like military operation and burst balloons whenever he feels the urge to have attention of twelve little spooky children, while best friend Kath is thrown in at the deep end and is to be found organizing the pinning on of bow ties on to attendant skeleton, alongside Nana/My Mum who cuddles exhausted wizards next to sister in furry gilet,
rather sensibly getting drunk in the corner, while clutching a of romantic poems and warning about the perils of holding competitive dancing competions in a world where every child has the right to feel special. 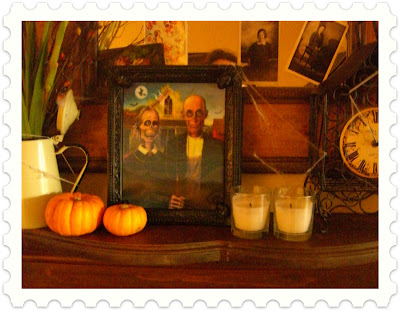 And all the time I stand in kitchen popping Kalms, feeling hyper-critical of state of Halloween nation, forgetting to judge bow tie/skeleton competetion, trying to prevent Mum from rigging said dance competition in favour of divine little girls who actually dance, over bonkers little boys bashing each other with magic wands, while talking boy WHO WON’T EAT down from stairs and preventing him blasting us all into oblivion with over enthusiastic boom of Micheal Jackson’s Thriller accompanied by the most terrifyingly inappropriate dance you have ever seen a six year old perform. 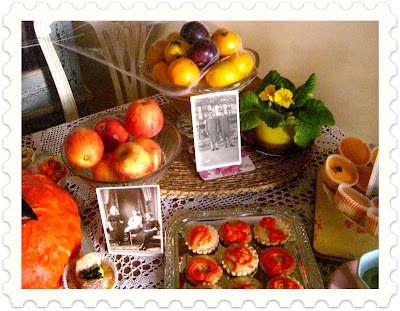 Then it is food time and I am ready for The Priory and Helen is ready for the Betty Ford Clinic and Mark is close to losing his marbles altogether and it is now very, very dark and very, very spooky and Harry Potter is playing dead on the floor and all the other kids are climbing on him and maybe we had best do Pass the Parcel before one of the grown-ups commits Hari-Kari or one of the kids disappears forever in game of Hide and Seek Mark has tricked kids who aren’t still eating into playing so we can all gather our thoughts on the the absolute lunacy that is throwing a party, before counting to three million and going to actually seek them. 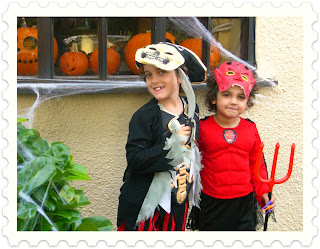 And then though it has been days in the creation it is over in a flash and the only thing to do is off-load pumpkin parcels stuffed with toffee-apples and cake and sweets and lots of gruesome plastic insects on to departing kids and try to be sensible in front of group of bewildered parents gathering their off-spring, and pull fake cobwebs out of my hair and phone Rich and say thank-you past myself for remembering to make the stalk of the pumpkin cake gluten free and carving pumpkins with a chain saw while simultaneously decorating my bathroom and nursing injury from pumpkin that fell on his head and knocked his glasses skew-wiff and his brain out of synch.
It is over and my little Devil is zappa-di-doodly-dooed but wants to sleep in his fake fingernails and I rather believe I will be hairless if every last fleck of pumpkin orange isn’t banished from my house forthwith and Mum might need a bucket of valium to recover from the whole affair, so the only thing left to be said, is that regardless of all that I have whinged about above, it was spookily good fun!
Roll on next year??

A House Without Books